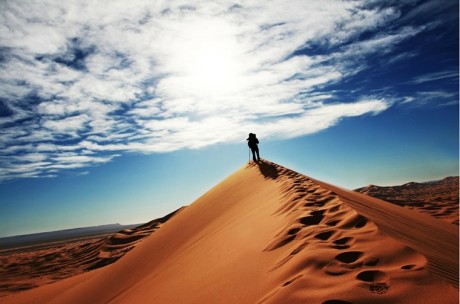 On my first journey to Africa, I found myself in Agadez, on the cusp of the Sahara Desert in the far north of Niger. Many years before, I had scoured a map of Africa, dreaming of empty places on the map, of lands about which I knew nothing. My eye fixed upon Niger. It seemed enticingly African: forgotten by the world and remote from my imagination. Agadez in particular lodged in my head as an isolated fortress somewhere close to the end of the earth. That I now stood there, on that very same spot of which I had dreamed, was akin to teetering at the edge of an abyss.

Travel very often takes you beyond your comfort zone, but I still remember those early days in Niger as a time of utter disorientation. I knew very little about where I was, and it was not lost on me that my experience was little different from so many white and Western interventions in Africa: understanding little, I had travelled to Africa seeking adventure and experience, without stopping to think whether anyone in Africa would actually benefit from me being there. Suddenly, the loose change that fell from my pocket seemed wholly insignificant.

And then I met Moussa.

Building relationships
Moussa was a Tuareg guide with whom I would travel out into the Sahara on a number of occasions over the years that followed. More than that, Moussa was a friend and he taught me so much more than how to navigate by the stars. The lessons that I learned from Moussa, sometimes in desert silence, were simple, but have remained touchstones on my many journeys to all corners of the African continent.

Ask people’s names. Greet them properly. Listen. Get out of your vehicle and sit down in the dust to talk with people where they sit. Stop long enough to talk and ask them about their lives instead of just asking for directions. Read enough before you go so that you know what questions to ask. Lose any sense of haste. Help where you can. Treat them as equals.

I don’t always get it right. Many times, I am in too much of a hurry, or find myself too caught up in my own worries to care very much about anyone else’s. But where I have followed these simple rules, I have made friends that I hope will last a lifetime – Azima in Mali, Hakim in Libya and Peter in Kenya, to name just a few.

Theirs are the stories, always retold with permission, that I bring back from Africa. Where possible, I send some of the proceeds from the sale of these stories back to these friends and their communities. And it’s not just about money: as in any true friendship, my life and their lives are richer because of our friendship.

Preserving wild places
Increasingly, the stories that matter to me focus on Africa’s forgotten peoples – indigenous peoples, traditional peoples – whose fraught relationship with the modern world threatens their very existence. In the same way, wildlife is under threat and has become my obsession, as have the wild places that endangered species and endangered peoples inhabit. In Africa right now, there are so many life-or-death struggles for existence, so many daily struggles for survival, that, as a writer, I feel a clarion call to tell those stories that no one else tells.

As a writer, I have a platform, but the more ordinary travellers who engage with these stories and with these struggles, the more likely it is that things will change. Perhaps the world will not change on a larger scale. But my guiding principles as I make my way through remote corners of Africa are twofold: to help to change one little corner of the world where I can – one person’s life, one species, one ecosystem at a time – and to bear witness.

And so it is that I have stumbled upon so many wonderful projects that seek to build a different future for forgotten peoples, for species in peril, and for those last pristine lands that remain. There is the Lion Guardians project (http://lionguardians.org) in the Amboseli region in southern Kenya, a project that uses traditional Maasai values to preserve communities and protect lions at the same time. There is the Kuru Art Project (www.kuruart.com) that provides work for local San painters in D’Kar in the Botswana Kalahari. Or the numerous projects across Africa supported by Panthera (www.panthera.org) in their effort to find a way for big cats to survive and for the people they live among to benefit from their presence.

The issues that these projects address, the issues that these Africans struggle with every day, are the defining issues of our time. They determine whether stories that stretch back thousands of years – about ancient species and ancient human cultures – will end in our lifetimes. And the only way to stop that happening as a traveller is to engage – truly, deeply – with those that we meet along the way, to listen to their stories and do what we can to assist them in their struggle for survival. One little corner of Africa at a time.

Anthony Ham is a writer and photographer who travels the world in search of stories. He has written numerous articles for magazines and newspapers in Australia, the UK and the USA, and has written or co-written more than 100 guidebooks for Lonely Planet. He is a frequent visitor to Africa and has travelled extensively in North, West, East and Southern Africa. Examples of his work can be seen on his website:www.anthonyham.com.