Sustainable Tourism and a Remote Island

Following the opening of St Helena Airport, the remote island is looking for ways to boost its economy through sustainable tourism.

The great primeval bulk of the Barn, part of the rocky coastline of this island formed by volcanic eruptions, towers above the crashing waves as the 100-seat aircraft shakily approaches St Helena Airport. It’s quite an entrance to one of the world’s remotest islands, located about a third of the way across the South Atlantic from Southern Africa to Brazil and accessible, since 2017, by weekly Airlink flights from Johannesburg. St Helena is so remote that the flight here takes six hours, as opposed to four hours on the way back, because the plane has to refuel in Windhoek before it crosses Namibia’s Skeleton Coast and the open sea: if the small Embraer aircraft is unable to land at the island’s wind-shear-prone airport, it needs enough reserve fuel to make it back to mainland Africa. 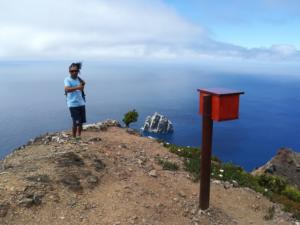 The sheer remoteness of this British Oversea Territory once inspired the Brits to banish Napoleon Bonaparte to the island’s green hinterland, where he died after five years in exile. Around 6000 Boers and a party of troublesome Zulus would also spend several years here, in a history that saw 1000 ships dock annually during the island’s heyday as an English East India Company outpost, before its fortunes declined when trade routes shifted north with the opening of the Suez Canal. Today, tourism is a key plank in the island’s economic development plan for the next decade, but transforming the sector into a healthy and sustainable industry faces challenges.

Firstly, there is the inevitable issue of access. The announcement of weekly flights, following the controversial airport’s construction, was welcomed by Saints, as the 4500 islanders are known. There are also extra flights around Christmas, partly catering to the many ex-pat Saints, who work in Ascension Island, the Falklands, the UK and beyond; a great leap forward from the five-night ocean crossing from Cape Town, even if Saints wax nostalgic about the RMS St Helena.

That said, the Embraer’s limited capacity is restrictive and, more significantly, so is the cost of flights, coming in at around £800 return from Johannesburg. Considering the wonderful Southern African destinations that can be reached for less from Johannesburg, including well-established tourism destinations from Cape Town to the Okavango Delta, it is unsurprising that planes to St Helena are rarely full. There is also the risk of not being able to land at the island’s windy airport, which could lead to a long wait in the Johannesburg Holiday Inn. A good illustration of these factors was the Fox family whom I met on the plane, six brothers and sisters who had emigrated to South Africa as children and were finally returning, 60 years later. They could no more afford to fly than they could face the sea crossing, and were finally visiting their birthplace thanks to a special on flights.

So how does St Helena build its brand and compete with the stiff tourism competition? Already, many Saints are frustrated that the airport has not provided the hoped-for boost to the island’s economy, which remains reliant on the UK, and tourism businesses receive low footfall. The island does, however, have strong appeal, both to adventurous seekers of a bucket-list, once-in-a-lifetime experience of this remote British outpost and to niche markets. The Napoleon connection is a marketer’s dream, with sights including the French-owned Longwood House, where the Emperor spent his days drinking sweet wine and dictating his memoirs, his tomb (now empty) and his first residence on the island, Briars Pavilion. I met several French tour operators on a recce and one already specialising in St Helena, while St Helena Distillery, the world’s remotest distillery, is making a brandy to mark the 200th anniversary of Napoleon’s death, which is set to attract French pilgrim-tourists in 2021. Producing spiced rum, coffee liqueur, gin from the local juniper and schnapps-like Tungi from the island’s prickly pears, the distillery opened in advance of the airport and benefits from both souvenir hunters and local consumption. (In the pubs of maritime Jamestown, the Shipwreck, a mixture of spiced rum and Coke, has long been a Saint favourite, while beer drinkers generally choose between South African and Namibian lagers.)

In terms of niche tourism, the rich marine life and shipwrecks attract locally run boat, snorkel and dive excursions; St Helena is one of the best places to swim with magnificent whale sharks, the world’s biggest shark. There is also an 18-hole golf course and resort in the pipeline, but its slated development in the island’s pristine heartland has angered some locals and, as a bleak report on St Helena by British mogul Lord Ashcroft notes, the developer recently changed hands. For me, there was major appeal in the fascinating history of this 120-sq-km island, the quirks of life here and the friendly Saints themselves. In the era of Trump, Brexit and terrorism, when the number of Brits and Americans emigrating to sleepy New Zealand has doubled, St Helena offers a safe and old-fashioned village atmosphere, where everyone knows each other (literally) and motorists unfailingly wave at passing cars. The mixed-race Saints trace their roots back to the settlers, soldiers and slaves who arrived across the ocean, including British sailors, African slaves, Chinese and Indian workers and Boer prisoners; not unlike South Africa’s ‘coloured’ population, whose mixed genealogy includes the slaves and Islamic dissidents brought from the East Indies by the Dutch East India Company.

Unlike South Africa, St Helena’s is an uncommonly non-racial and colour-blind society, but the comparison between the two carries through to language. Like Afrikaans, a creolisation of Dutch by the ancestors of today’s coloured people, the thickly accented, rapid-fire, slang-peppered English spoken by Saints is the unique legacy of the diverse people brought by the trade winds. Somehow managing to simultaneously echo Cornish, Irish, American and Australian lingo, the best description I heard of the Saints dialect was ‘like a cross between Yoda and a pirate’.

With this sociological interest in mind, the historical Magma Way tours run by Basil and Kevin George were fascinating, not just to see the sights but to hear their anecdotes of island life. Showing us Jamestown’s vertiginous 699-step Jacob’s Ladder, built in 1829 to haul up manure and send goods down, 82-year-old Basil demonstrated the technique he developed for sliding down the railings on his way home from school. The many historical sights range from capital-in-a-canyon Jamestown and the imposing 19th-century High Knoll Fort to the Boer Cemetery and the white stones in Rupert’s Valley, a memorial to the slaves once buried in unmarked graves. 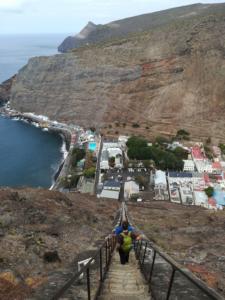 sm can help Saints to preserve their traditions – a concern for some with young people leaving in search of work while the airport, not to mention the forces of globalisation, brings in outsiders. Given the island’s small population, an influx of even just a few hundred people could have a profound impact; South Africa comes to mind with its high rates of crime and emigration, and one family on my flight was a case in point. Answering this issue was the hands-on cooking experience at Richards Travel Lodge, where Linda Richards taught us how to make island specialities including spicy fishcakes and Plo, a kind of curried paella.

Similarly, conservation of the island’s endemic flora and fauna, which most famously includes the plover, known locally as the Wirebird, has to contend with centuries of alien species. Notable incomers include African succulents, the termites that reduced Jamestown to dust in the 19th century and, most recently, the elusive simian-feline ‘Monk-Cat’, thought to be a civet that hopped off a boat from Namibia. There is now the 32-acre Millennium Forest Project to re-establish rare endemic gumwoods, while my walks with St Helena National Trust guides to Blue Point and Diana’s Peak (823m), the island’s highest point, were scenic highlights. The walks are two of the 21 Post Box Walks that explore this tropical island’s striking mix of barren, semi-desert coastline and pastoral interior, with its lanes winding between emerald hills and along windblown ridges like a chunk of Cornwall that went to sea. With more affordable air access – perhaps provided by competition on the route from Johannesburg and the option of flying straight from Windhoek – and continued marketing of St Helena’s considerable appeal, tourism can build on its positive contribution to St Helena’s economy, culture and conservation.