The World’s Most Trafficked Animal! 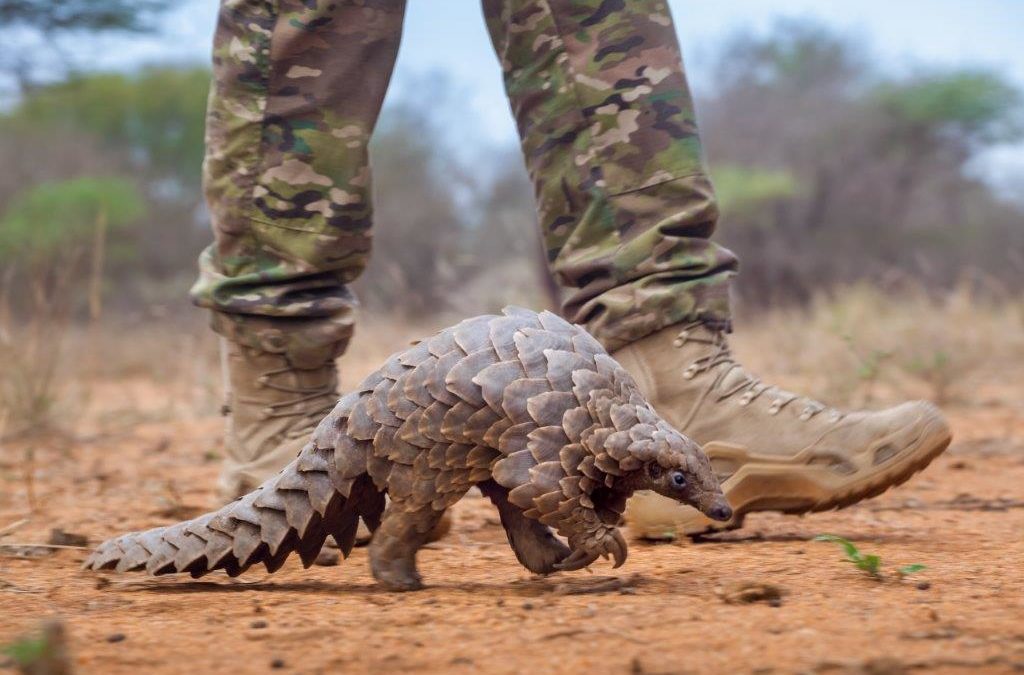 All my life, it had been my dream to see a pangolin. This gentle, bumbling creature is one of South Africa’s least-known species. Having been on safari numerous times – and then relocating to live on the edge of Kruger Park in South Africa – I always hoped and hoped. I was beginning to think they must be mythical, unicorn-like creatures. I would always eagerly ask the guides if they’d ever seen one, and what the chances of seeing one might be. But they’d always shake their heads wisely, telling me how rare they are, and how despite spending their working life in the bush, most could count on one hand how many they’d seen. But at least they did exist – so there was always a chance… 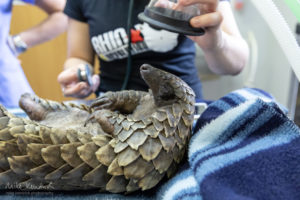 Pangolin being anaesthetised for the initial inspection and drip on arrival at RR. © Mike Kendrick

And then one evening I got a phone call out of the blue. A pangolin had been sighted on a nearby reserve, 30 minutes away. Supper was abandoned, and I jumped in the car and raced to the spot. Kind friends, knowing how desperate I was to see a pangolin, waited at the reserve gate for me, to arrange access and lead me to the spot. I was convinced it would have shuffled off into the twilight by the time we got there. But lo and behold, there tucked under a bush was the magical creature of my dreams – a Temminck’s pangolin, looking like some prehistoric, animated pine cone. Giddy with glee, I hopped up and down hugging everyone, not knowing whether to laugh or cry. It was stationary in the undergrowth, obviously hoping if it stayed still long enough, these two–legged creatures might go away. It touched my heart to see how vulnerable it looked – as it would have been so easy to pick it up.

But be careful what you wish for! Roll forwards a few months – and my dream turned to a nightmare. I was now surrounded by four very compromised pangolins that had been confiscated from poachers. I am fortunate to work with Rhino Revolution, based in Hoedspruit on the borders of Kruger National Park in South Africa. Rhino Revolution is caring for pangolins seized from the illegal poaching trade by police and anti-poaching units. 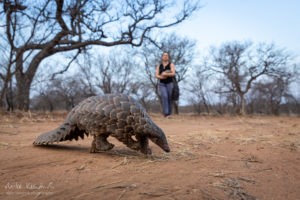 Aura being walked at dusk (young female, still too small to be released yet). © Mike Kendrick

Pangolin now have the dubious honour of being the world’s most illegally trafficked animal. They are being poached for their scales, which are in high demand by Asian markets for use in traditional medicine. Just like rhino horn, their scales are made of keratin – no different from human toenails.

The UK’s Prince William has declared that these bizarre creatures run “the risk of becoming extinct before most people have even heard of them”.

Also known as scaly anteaters because of their plated armour, long tongues and favourite snacks, they are so unique they have a classification all to themselves, Pholidota. Despite frequent comparisons to anteaters and armadillos, they have nothing in common taxonomically. 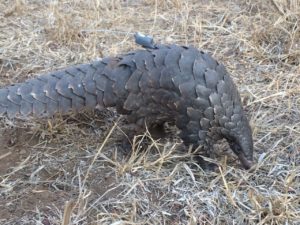 About the size of a small cat, they are completely covered with scales – which start off soft and harden as the creatures get older. The armour-like scales come into play when pangolins are under attack when they curl up into a spiky ball. For millions of years this defence mechanism has successfully fended off natural predators; however, it is now failing pitifully against humans, who can just pick up the vulnerable bundle.

The pangolins arrive at the Rhino Revolution Rehabilitation Centre extremely compromised – very stressed, malnourished and dehydrated after being kept illegally in captivity for days, with no food or water. These rescued pangolins require round–the–clock medical care and support.

At night, if well enough, the pangolins are “walked” in the bush for them to find their own food supply of ants and termites. This is to encourage natural feeding behaviours and normal dietary intake as soon as possible. Walking in the bush can take many hours every night…and the pangolins are always accompanied by a vet nurse and an armed guard.

It is Rhino Revolution’s aim to release the pangolins back into the wild as soon as possible – once they are healthy and weigh more than 5kg. The first pangolins have already been released, each wearing a GPS and VHF tracker, so their progress and well-being can be monitored remotely. They are released into secure reserves, in areas as near as possible to where they were found, and are monitored by trained researchers.

It will be interesting to see if the current coronavirus scare will have any impact on the numbers of pangolins being poached in Africa. There have been suggestions that the virus has arisen from cross-infection with pangolins held captive in the illegal wildlife markets in China. We can but hope for a silver, scaly lining in this pandemic virus cloud.

Pangolins are nocturnal animals, so seeing one in the wild is tricky enough at the best of times. Understandably guides may also be reluctant to share the information of known territories in fear of these creatures’ safety. Having said that, there are some places where, with a lot of luck, it is still possible to see one of these endearing creatures in the wild.

In South Africa, Tswalu, in the Kalahari, has a great reputation for pangolin sightings, especially in the South African winter/dry season. Garonga Camp in the Makalali Private Nature Reserve in the Greater Kruger Area also has a pangolin research project currently underway, using camera traps.

How you can help pangolins

Harriet Nimmo and her husband drove a Toyota Corolla around Southern Africa 23 years ago – digging it out of the Makgadikgadi Pans, Mana Pools and the Kalahari.  Since then she has conversed with chimps and gorillas, stayed with the Afar, cavorted with lemurs and tracked desert elephants.  She and her husband finally jumped ship and relocated from the UK to South Africa in 2011. Their most recent sojourn saw them driving from Cape Town to Nairobi, and finally settling in a small bush town in Limpopo.  Here Harriet helps save elephants and rhino, as well as co-founding the Wild Shots wildlife photography conference. In her previous life, Harriet was CEO of the international conservation communications NGO, Wildscreen and founded ARKive.org.